The Chinese Restaurant Database is an original database created from the immigration files of Chinese immigrants. It contains granular data on the formation and operation of Chinese restaurants, in combination with the immigration patterns of people involved. This data helps illuminate the resilience and creativity of immigrant responses to legal adversity. 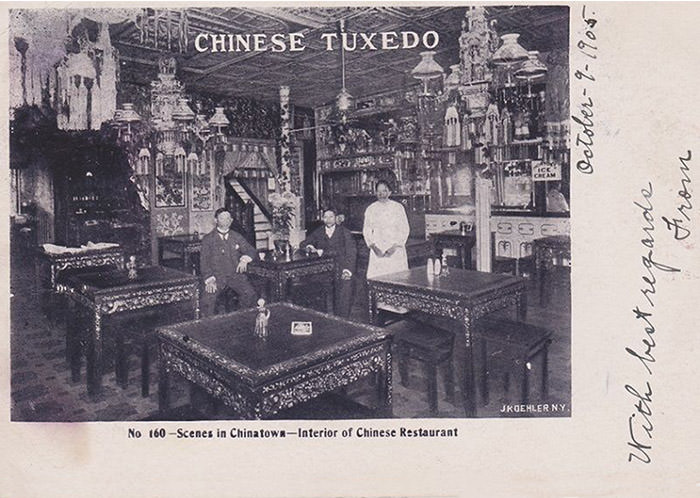 There are more Chinese restaurants in the United States than the number of Burger King, KFC, McDonald’s, and Wendy’s chains. The Chinese restaurant industry took off in the early twentieth century, at a time when U.S. immigration laws barred most Chinese from legally entering the country. If the Chinese were not legally allowed into the country, how were they opening so many restaurants?

It turns out that the Chinese established restaurant to enter the United States through a legal loophole. The Chinese Exclusion Acts, which were in effect between 1882 and 1943, prevented Chinese laborers from immigrating. It permitted, however, the legal entry of Chinese businessmen.

During World War I, a New York court ruled that Chinese restaurant owners were businessmen and entitled to special immigration privileges. Thereafter, the Chinese formed a flurry of restaurants that qualified its primary investors for this status. This a migration-oriented business model facilitate movement between China and the United States.

The Chinese Restaurant helps illuminate the resilience and creativity of immigrant responses to legal adversity. Created from the immigration files of Chinese immigrants, the original database contains granular data on the formation and operation of Chinese restaurant, in combination with the immigration patterns of people involved.

Professor Heather R. Lee launched this historical data-gathering project in 2011 to provide a publicly accessible data source on immigrant business formation. The team is comprised of students from NYU Shanghai, Columbia, Stanford and beyond. They are processing and interpreting data. The below illustrations below is preview of findings from the data.

Why this data matters

Following the passage of the Chinese Exclusion Act of 1882, the U.S. federal government began keeping detailed records of Chinese immigrants. Collectively, these files comprise the most comprehensive source on Chinese business activity in the United States. Any Chinese seeking merchant status had to submit documents and witness testimony to demonstrate the extent and quality of his or her business.

The Chinese Restaurant Database Project uses data and digital technology to enhance the study and understanding of immigrant-dominated industries in American cities. Because the Chinese rarely communicated directly with government officials, the Chinese Restaurant Database project allows us to examine the only form of communication between Chinese immigrants and American officials: Chinese immigration documents. By exploring the information found within these historical documents, key trends regarding migration-oriented business models can be extracted to shed light on the intimate connection between migration and Chinese restaurants.

For the past ten years, Professor Lee has been creating data on Chinese restaurants in the United States from records publicly accessible immigration records. The Chinese Restaurant Database exists in two forms: an extended and abbreviated version. The extended version contains 264 unique pieces of information on individuals connected to the restaurant industry. The abbreviated version, described below by Karla Wang, a research assistant in Spring 2020, contains 25 data points on each applicant.

Each immigration folder that is processed contains digital copies and images of a variety of immigration documents such as citizenship applications, interview transcripts, and letters between inspectors. 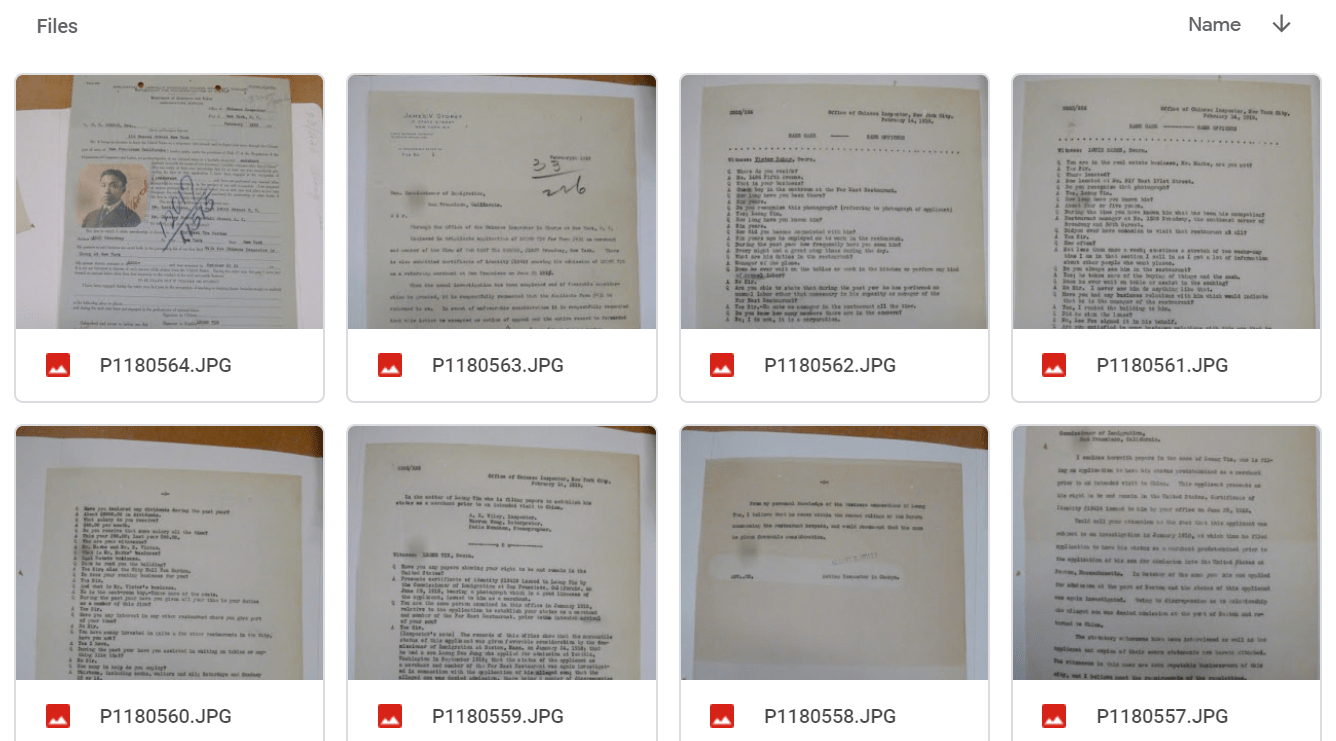 After identifying a Form 431 in each folder, information from that document is recorded using a google form tailored for that specific application type.

All information provided by the applicant or an immigrant inspector is collected as data using the google form.

This information can take the form of the location of the immigration office, the name and address of the applicant’s business, witness names, investment amounts, the applicant’s physical traits, and the signatures of inspectors or commissioners of immigration. 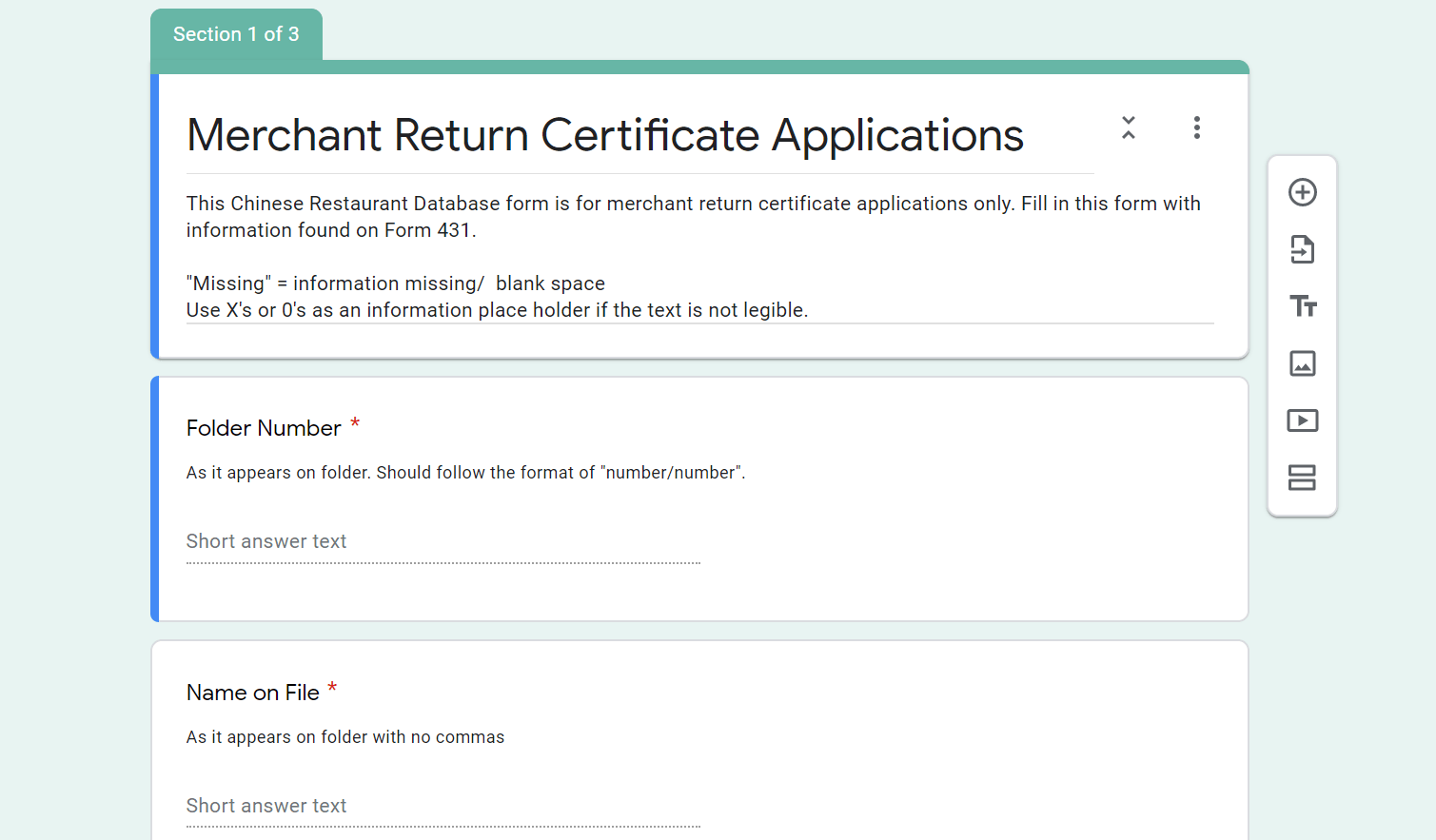 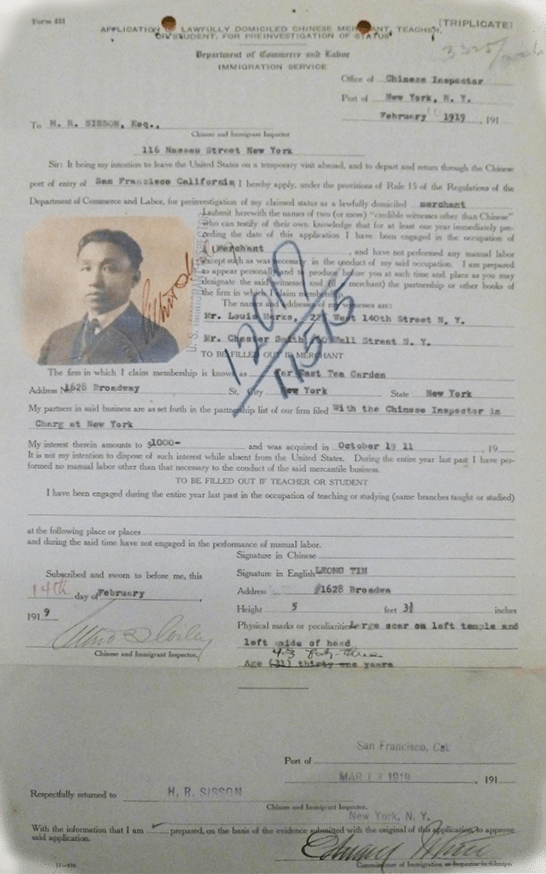 Because there are thousands of Chinese immigration folders available for the creation of the Chinese Restaurant Database, it is important to keep track of which folders have been processed. This is done through an extensive document checklist. 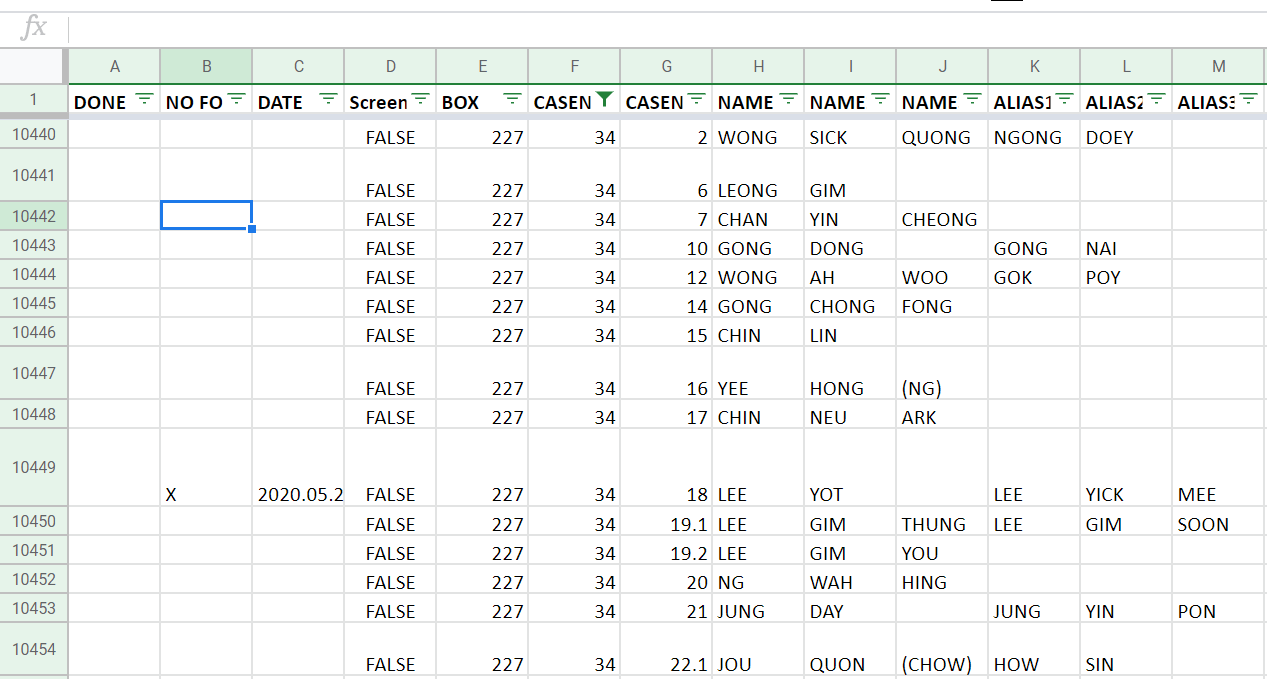 After looking through a folder and recording the information from a merchant returns certificate application form, the corresponding entry in the document checklist is marked as done with the date of completion provided as well. This creates an efficient data collection process from start to finish.

As a student researcher for the Chinese Restaurant Database project, working on the project has forever solidified the fact that food holds immense historical and cultural importance in understanding the Chinese immigrant experience. Whether it be through cooking food or eating food, Chinese cuisine and Chinese restaurants symbolize the resilience and strength of Chinese immigrants in overcoming legal hardships. As such, gastronomy provides a unique, alternate way to explore immigrant history, one that illuminates immigrant struggles and highlights the role of food in telling the story of a generation.

NYU Shanghai student majoring in interactive media design partnered with professional illustrations to create an interactive visual storybook. Students worked on this project for academic credit through the VIP NY Immigrant city guided research seminar. The below materials is a preview of their work in-progress. 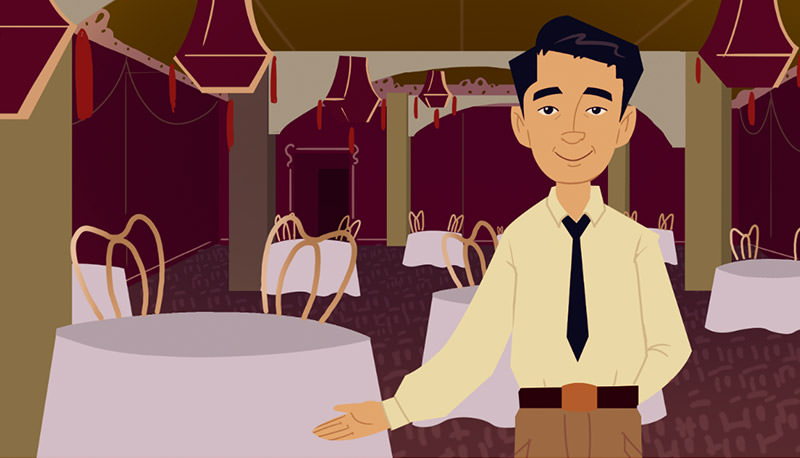 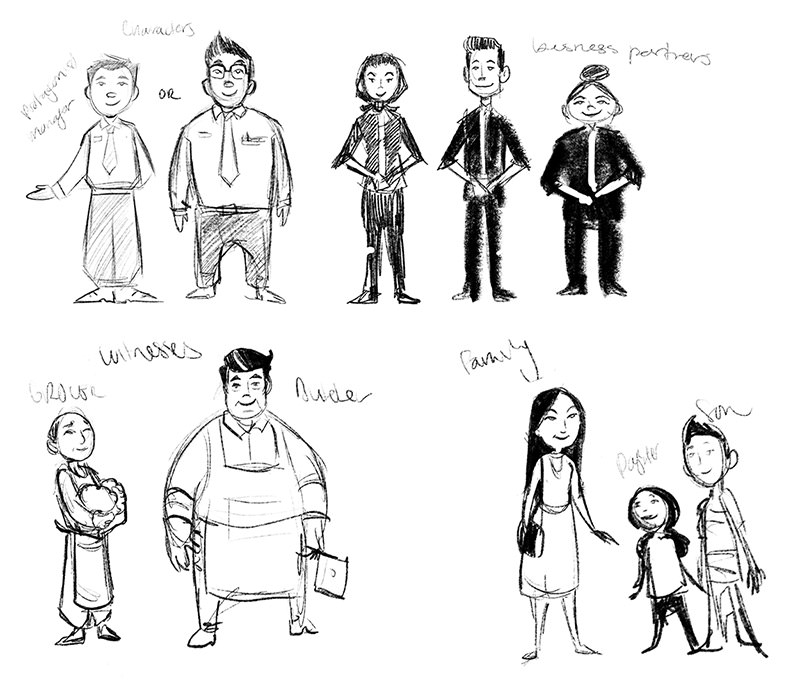 This database makes use of the extensive investigation procedures under Chinese Exclusion. The US Immigration Bureau kept records of each Chinese immigrant in the United States. Anyone seeking the immigration status of “businessman” had to submit themselves to detailed scrutiny of their business, migration, and family histories. The NYU Shanghai team has combed through hundreds of individual immigration files to capture data to that reveals the relationship between Chinese migration and business strategies.

Researchers carefully read each immigration file and enter pieces of data into an online form, created for this project. To ensure reliability of data, each file is processed by two people at least, and verified by a third individual. The data from files that have complicated the verification stage are part of the final database. 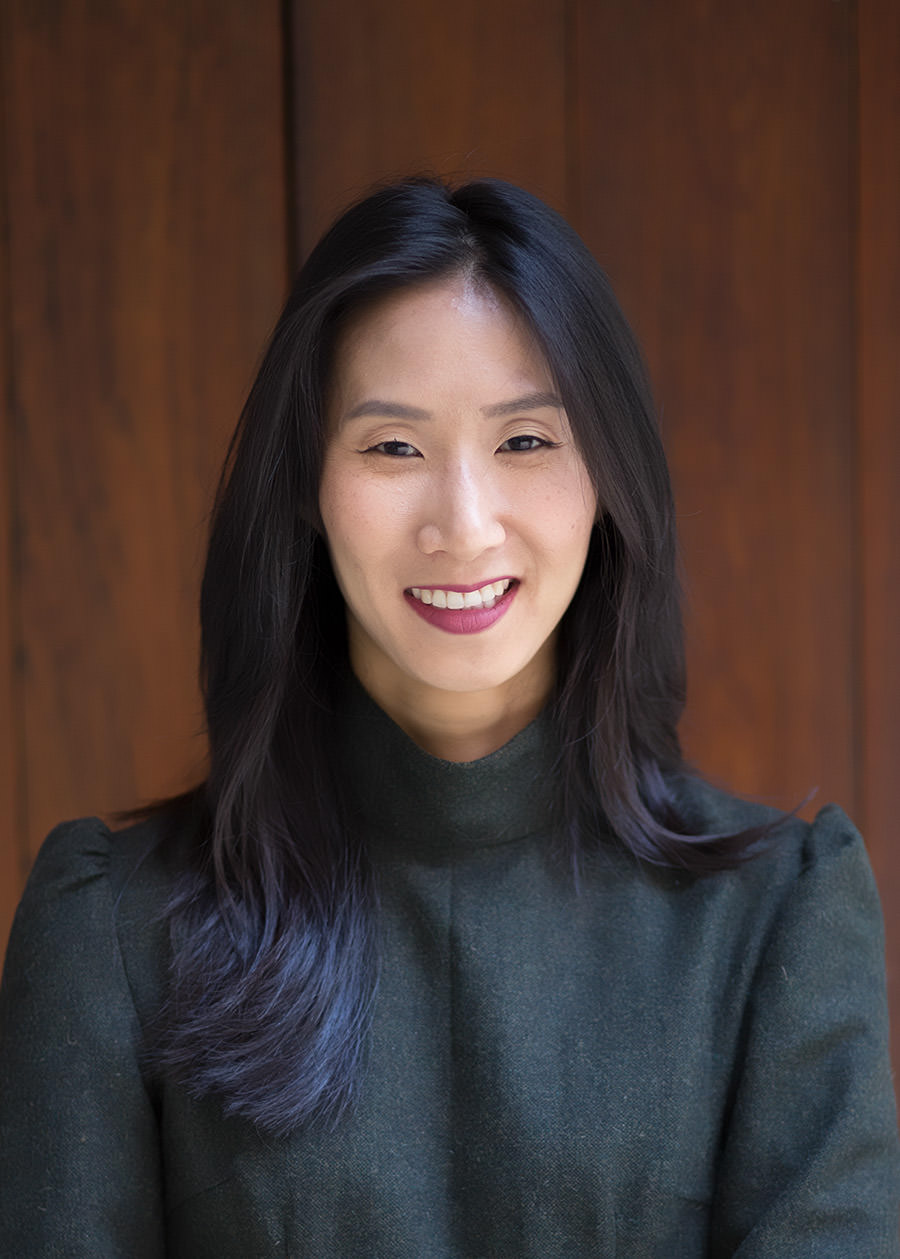 Heather R. Lee is an Assistant Professor of History at NYU Shanghai. She studies the transnational flows of people and capital between North America and Asia during the nineteenth and twentieth centuries.

Professor Lee is developing a historical database of immigrant restaurants, which she will make publicly available through an interactive digital platform. Her research has been featured in NPR, Atlantic magazine, and Gastropod, a podcast on food science and history. She has advised and curated exhibitions, including shows at the New York Historical Society, the National Museum of American History, and the Museum of Chinese in America. 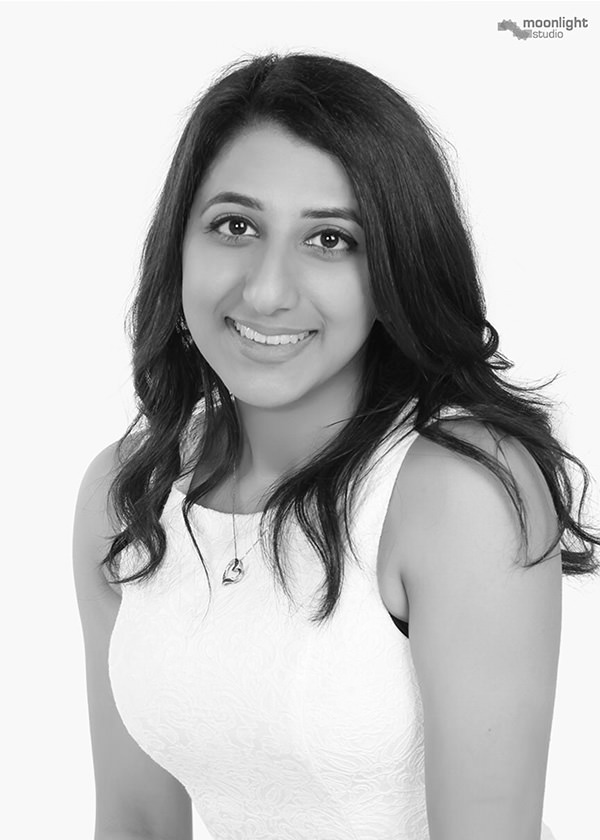 Sarah is a passionate programmer, filmmaker and digital artist currently studying Interactive Media Arts at NYU. Her interests range from biotech to film noir. She is driven by innovation, efficiency and how those desires manifest themselves in our world. 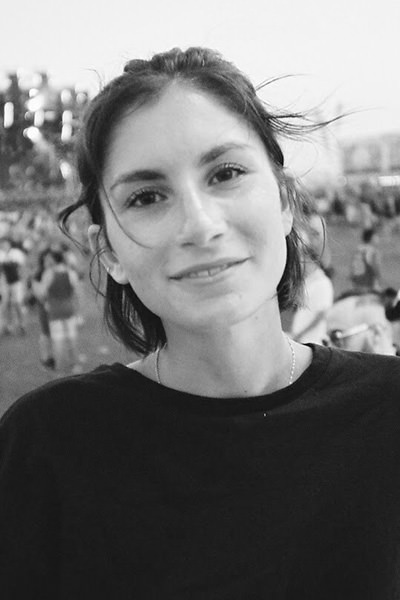 Marina Victoria Pascual is a New York-born and Madrid-raised undergraduate student majoring in Interactive Media Arts at NYU Shanghai, with a minor in Studio Art and Psychological Studies. Most of her work involves either creative coding, 3D animations, video art or audiovisual performances.

As a young aspiring artist, Marina uses her digital skills to express her thoughts on the limits of the human body and our perception of the world. 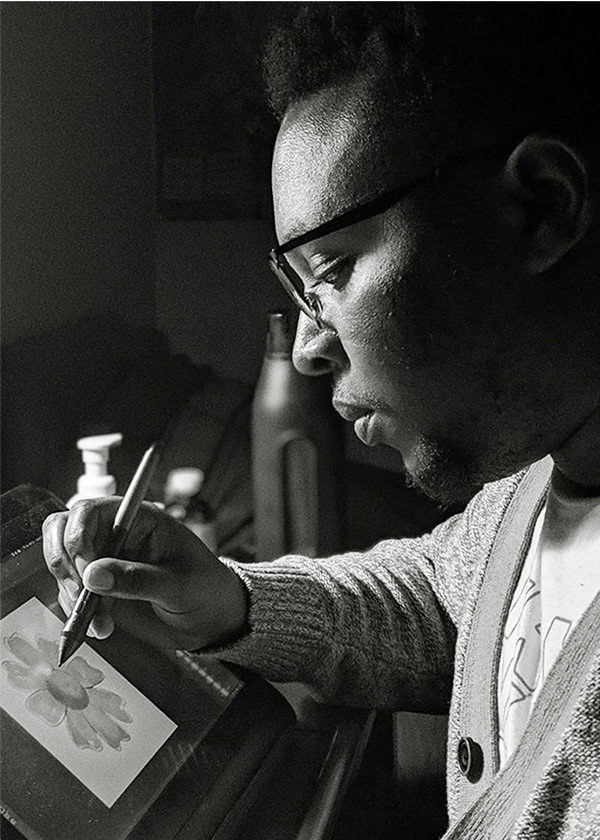 Trevor is an illustrator from New Jersey who has always been fascinated by art and animation. From a young age he found that drawing was something that would have a great presence in his life.

In 2016 he graduated from the University of the Arts in Philadelphia with a Bachelors in Fine Arts. Since then he has worked on a number of freelance positions such as Character Designer for Silverclutch Games and Coloring Book Illustrator for Infinity Coloring Books. 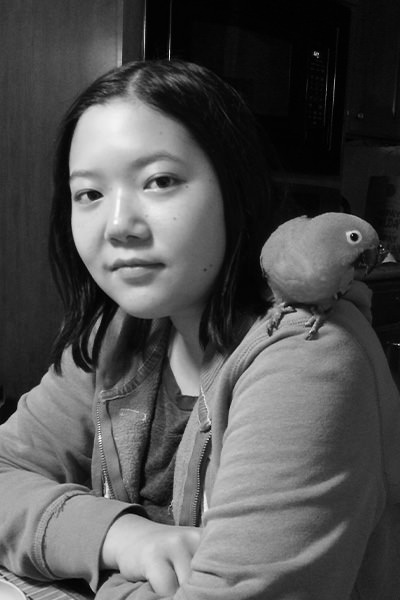 Karla Wang is a high school senior at BASIS Tucson North who will be attending Cornell University in fall 2020 to continue her education. There, she plans to study business administration and statistics.

During her senior year, she conducted a senior research project exploring the idea of authenticity within the context of gastronomy and ethnic food. Her research aims to identify what factors Americans believe are necessary for Chinese cuisine in America to be considered authentic through a retrospective discourse analysis of online Yelp reviews. Karla’s research was awarded a 2019 Founder’s Prize, a recognition given to BASIS students with the most unique, innovative, or rigorous senior research projects.