Exploring the implementation and legacy of the 1917 Immigration Act, also known as the Asiatic Barred Zone Act. 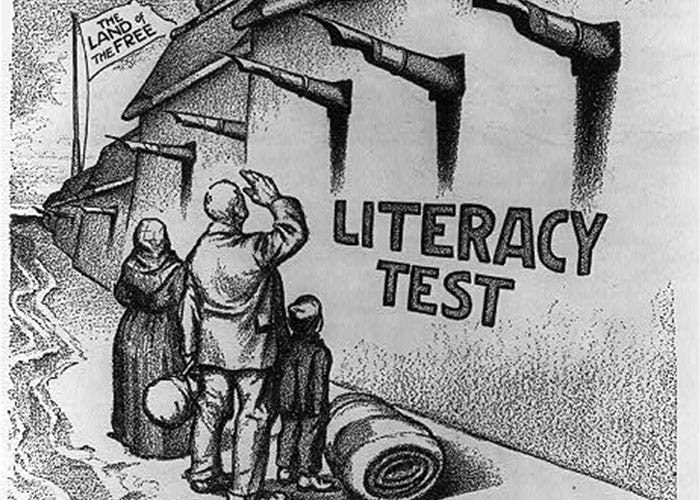 Our team created this podcast to explain the impact and legacy of the 1917 Immigration Act. Although perhaps less well-known than the 1882 Chinese Exclusion Act or the 1924 Immigration Act, the 1917 act was a crucial extension of existing anti-immigrant legislation. It contributed to existing racialized discourse surrounding immigrants in the United States.

Our podcast will cover the legal and social background of the act, congressional debates that illuminate its intent and impact, and its lasting effects and contemporary relevance. We plan to highlight aspects of the act including its effects on organized labor, literacy, anti-Asian racism, and its echoes in present-day immigration discourse.

In the Fall semster of 2019, our team has continued in the vein of research begun last semester regarding the 1917 Immigration Act. Last semester, the team presented their research on the labor, literacy, and anti-Asian sentiment surrounding the 1917 Act in a 20-minute podcast. This semester, our team has developed the research further to explore additional aspects of the act.

Our podcast is divided into three short episodes, each with its own theme.

The first podcast focuses on the figure of Woodrow Wilson during the era of anti-Asian immigration, particularly his personal history in dealing with issues of race and his veto of the 1917 Immigration Act.

The second podcast focuses on the cultural depictions of Asian immigrants that were used to incite fear among white Americans of an Asian invasion and popular receptions to anti-immigration sentiments.

The third podcast looks beyond the 1917 Act to the 1924 Immigration Act, focusing particularly on its racial and judicial ramifications. 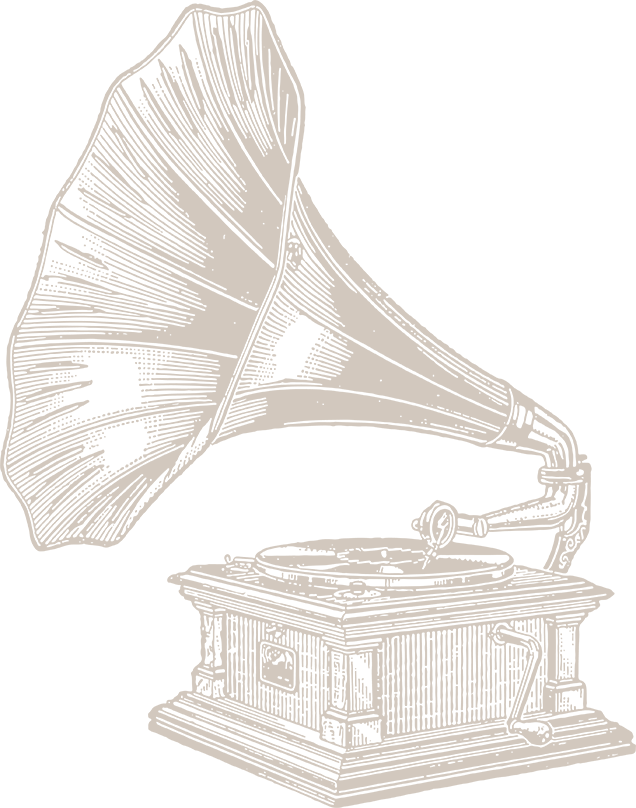 Join the 1917 History Beyond Team as we discuss the 1917 Immigration Act in three parts: Labor, Language, and Race. And explore additional visual resources below.

The introduction to a series of podcasts presented to you by Andre Wu, Angie Tang and Sophie Zhao! This group has researched a different topic each and articulated their findings in a form of a podcast. Drawn from the work last semester’s 1917 group had done, this team hopes to help you reach a deeper level of understanding and interest of the 1917 Act and how it relates to modern events.

Woodrow Wilson’s record on race relations was not very good. As president, he oversaw unprecedented segregation in federal offices. Why a segregationist like Wilson would veto the Immigration Act of 1917, otherwise known as the Asiatic Barred Zone Act? We will explore the hidden history in this podcast written by Sophie Zhao.

Tracing the Development of Anti-Immigration Rhetoric

The 1921 and 1924 Acts were extensions of the 1917 Act; they targeted Europeans countries, especially the “inferior” group from East Europe. Listen to the biases that allowed such acts to pass, and how limitations on immigration affected these countries and the U.S. Script written by Andre Wu.

Listen to what the previous semester have to say about the 1917 Immigration Act! This longer podcast goes more in depth about the labor, literacy, and racial aspects of the 1917 act. Presented to you by: Andre Wu, Katherine Platz, Maggie Chirdo, and Natalie Behrends.

A bearded immigrant appearing before a board of inquiry 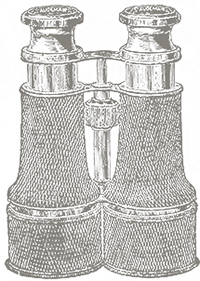 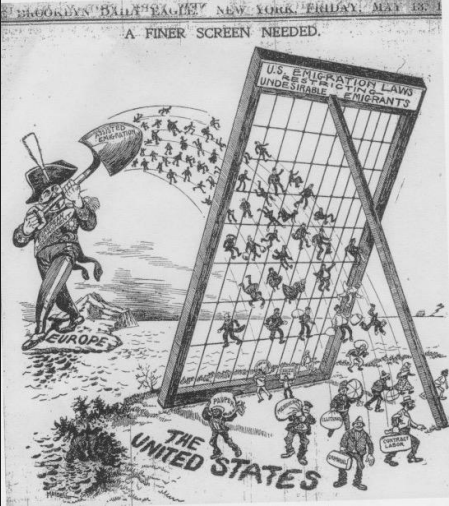 This cartoon depicts the 1917 act as a filtering mechanism to eliminate “undesirable” immigrants from the group entering the United States. The act opposed immigration by criminals, anarchists, disabled people, illiterate people, and contract laborers, among others. 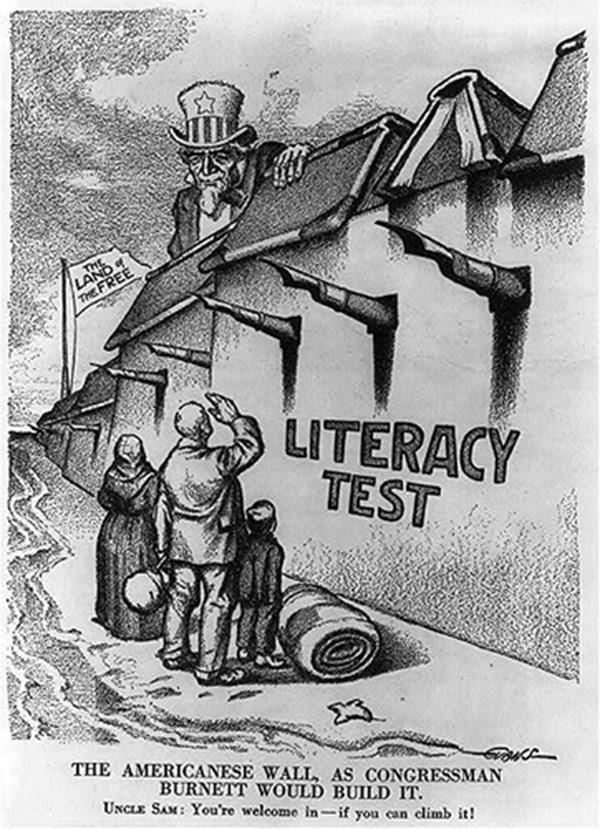 “The Americanese Wall, As Congressman Burnett Would Build It.” A political cartoon demonstrating effect of the 1917 literacy test on immigration, drawn by John Taylor. 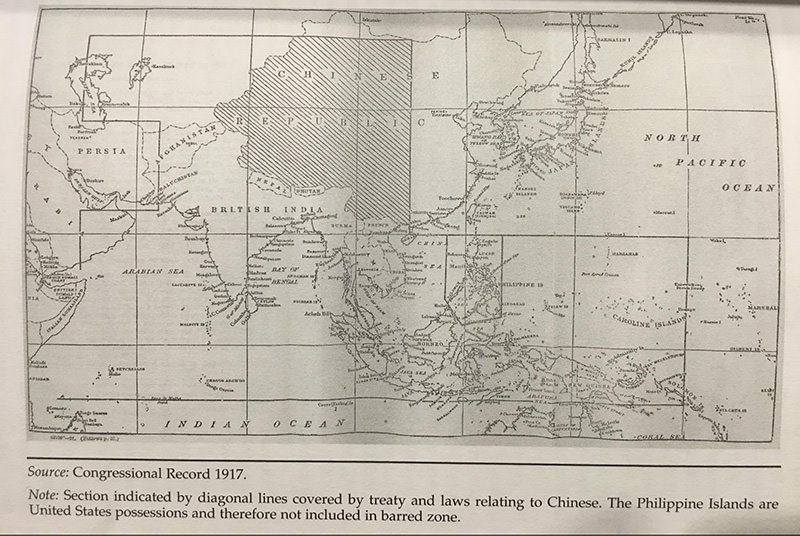 Map of the Asiatic Barred Zone, from the 1917 Congressional Record. The 1917 act extended previous legislation to create a barred zone encompassing much of east Asia and the Pacific Islands. The Philippine Islands were not included in the barred zone, because they were occupied by the United States. (Source: Cainkar, Homeland Insecurity, 75)

In 1918, California Senator James D. Phelan ran for election on a political platform based on anti-Asian rhetoric. His political poster advocated further limitations on immigration, arguing that a “silent invasion” of Asian immigrants could “convert the fairest State in the Union into a Japanese colony. If they were naturalized they would outvote us.” (Tchen, Yellow Peril, 246) 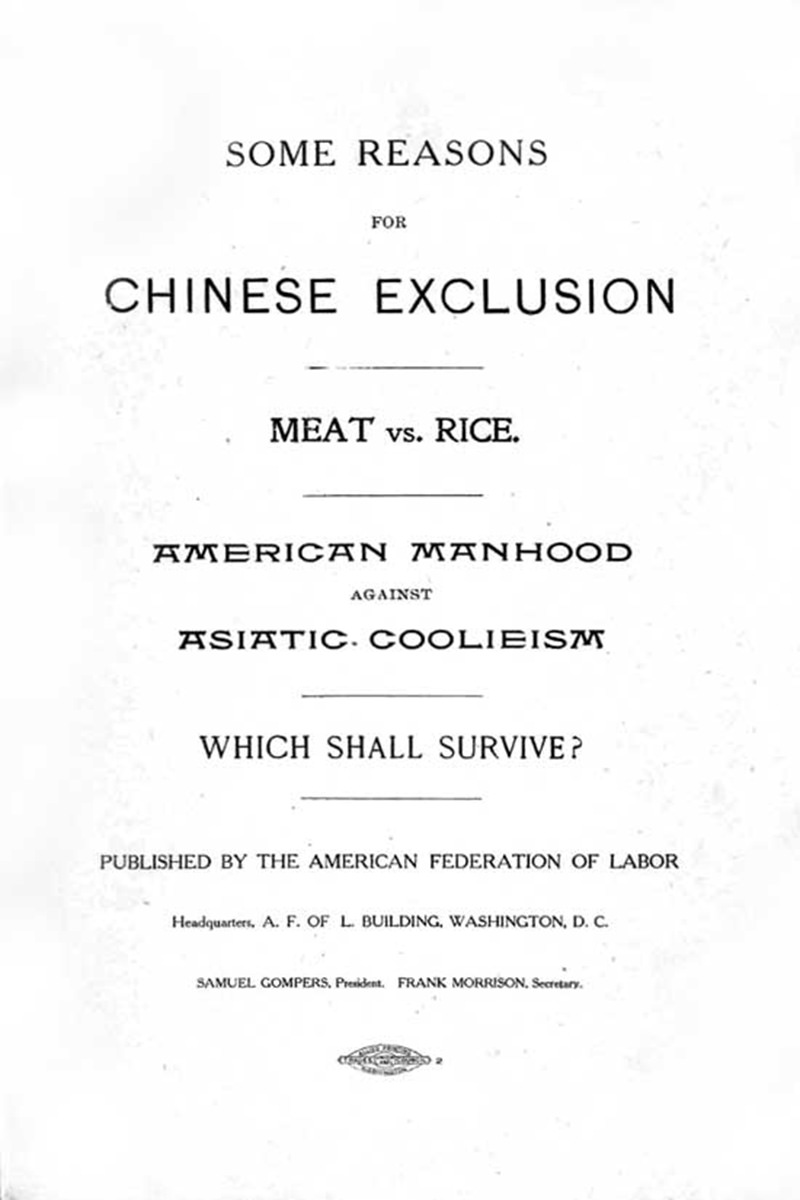 In 1909, the American Federation of Labor distributed a pamphlet titled “Meat versus Rice: American Manhood against Asiatic Coolieism. Which shall survive?” The pamphlet framed the implementation of anti-Asian immigration restrictions as a battle between American workers and foreign immigrants. The pamphlet stated: “While the Chinaman works industriously enough […] he underbids all white labor and ruthlessly takes its place, and will go on doing so until the white laborers come down to the scanty food and half civilized habits of the Chinaman.” (pg 13) It went on to say that “in spite of their (Chinese) residence in the United States for half a century there has been no improvement in their social or moral conduct.” (19) These arguments were used to justify Asian exclusion in the name of protecting the American working class. 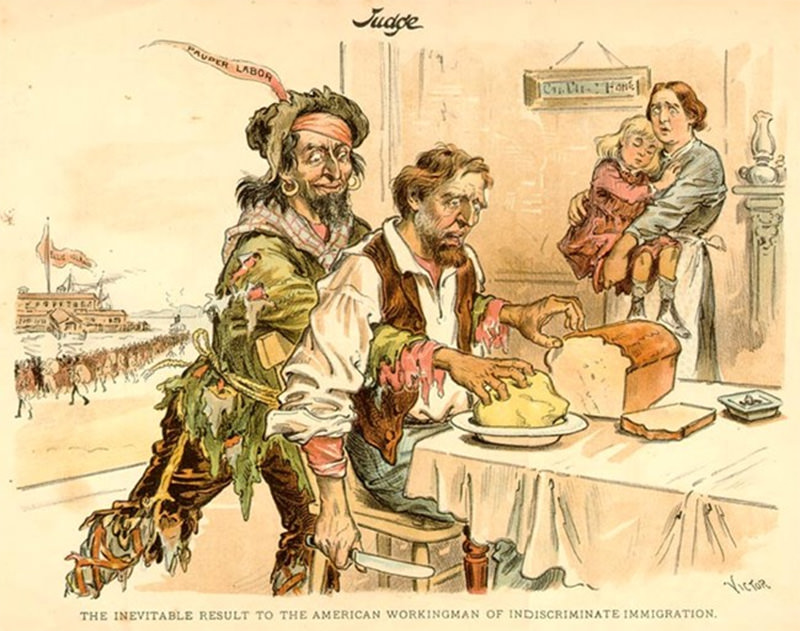 This cartoon, from the satirical magazine Puck, reflects the stance of mainstream organized labor on immigration: un-American (and visibly nonwhite) “paupers” stealing the bread off of hardworking Americans’ tables. 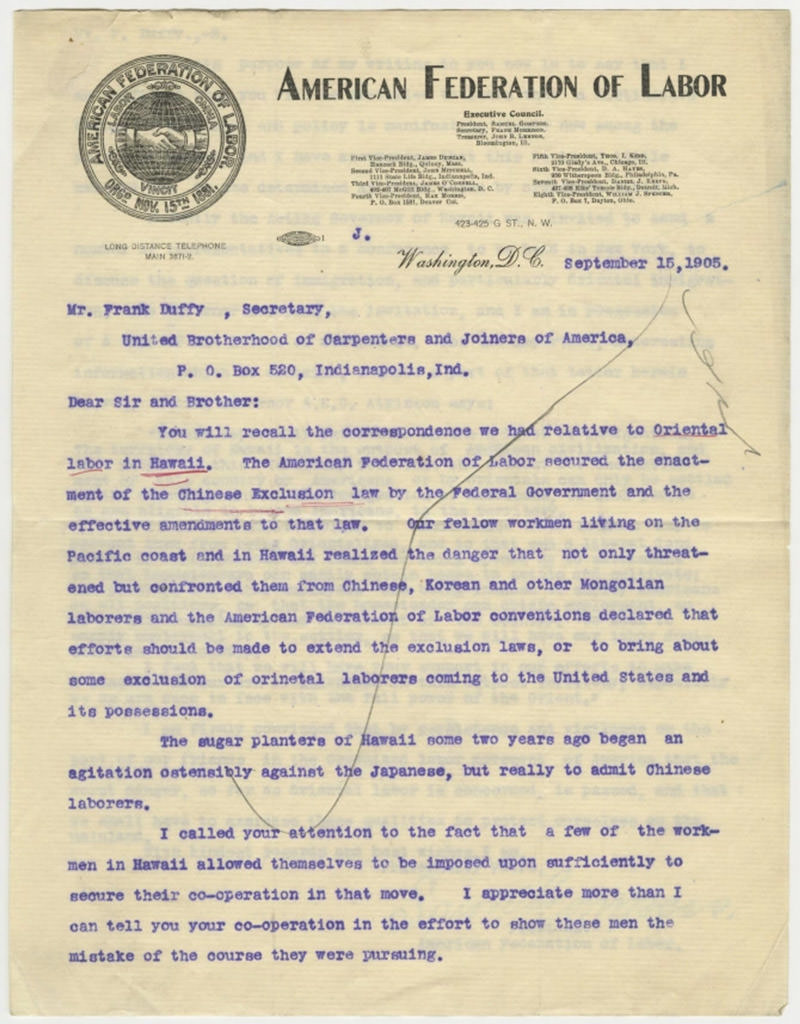 In this letter from 1905, AFL president Samuel Gompers credits his organization with “securing” the passage of the Asian Exclusion Act and promises the AFL’s commitment to expanding Asian exclusion. 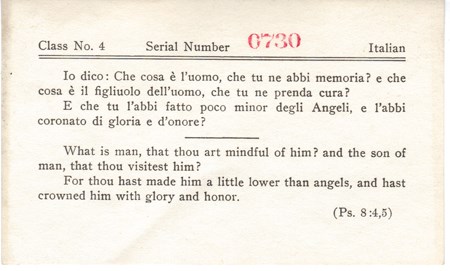 An example of the primary literacy test, using a bible verse. Translated in English and Italian. Courtesy of Ellis Island, National Park Services, 2019. 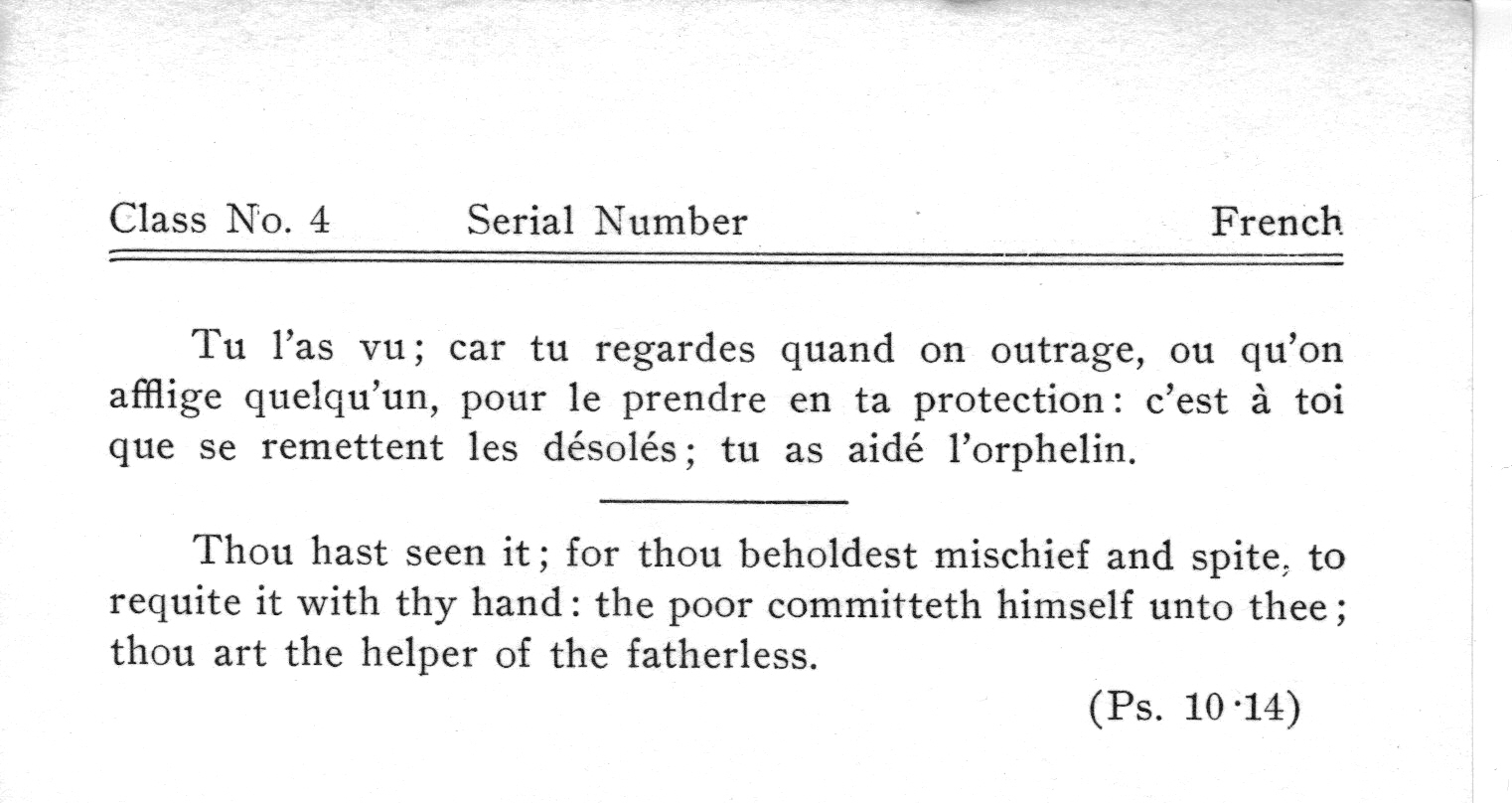 Another example, this time a French version of the literacy test. Courtesy of Ellis Island, National Park Services, 2019. 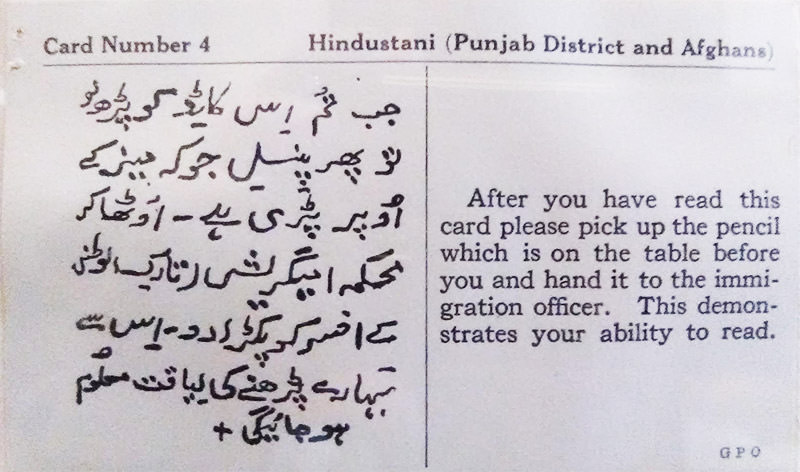 The secondary literacy test, given to non-Christian immigrants. It asks the reader to perform a task in order to prove their literacy. Courtesy of Ellis Island, National Park Services, 2019.

Our research did not appear from thin air. We pay thanks to those before us, who documented, archived, and sorted the information about the 1917 Act. You can read more of their work here. 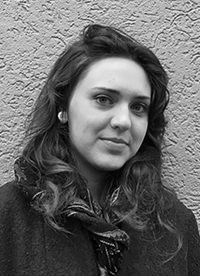 Natalie is a graduating senior in History at NYU and a PhD candidate in Global History at Harvard. Her work focuses on global intersections of labor and migration at the turn of the twentieth century, expanding narratives of citizenship, engagement, and identity in the history of labor and political radicalism. 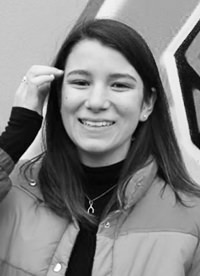 Margaret is a junior studying journalism and history at NYU. Her reporting and research focus on queer activism, immigration, and the Global South. She was born in Texas and spends most of her time at museums with free student admission policies. She hopes to bring lesser-known American history and all its jagged edges to the forefront of public consciousness. 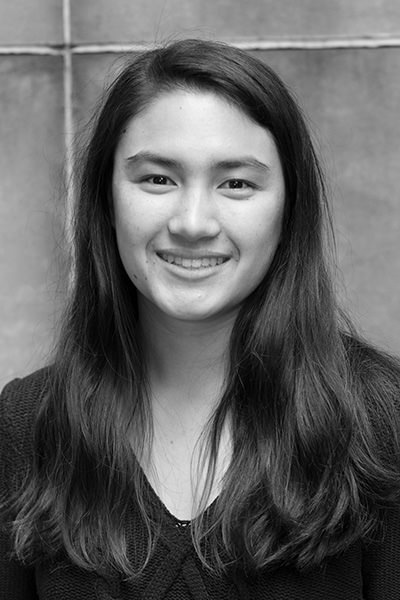 Katherine is a senior studying History in the College of Arts and Science. She is originally from California, and loves to read and drink boba in her spare time. She is excited to learn how to use digital tools for data visualization, storytelling, and archival preservation. 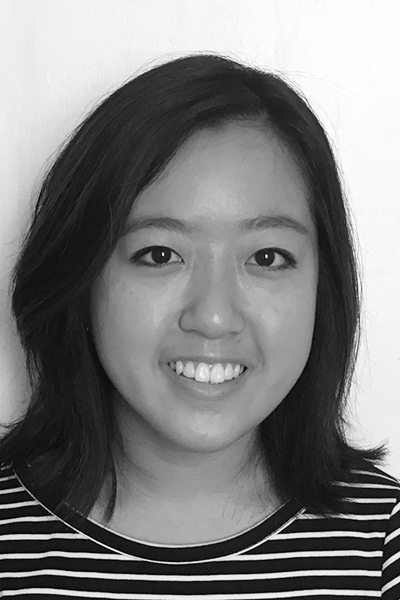 Angie is currently a junior at the Gallatin School of Individualized Study. She is interested in the history of the development of New York City, particularly in regards to traditionally marginalized groups, and of how discriminatory attitudes and actions have been manifested in the spatial environment of the urban fabric. Her research has primarily focused on cultural depictions and media representations of Asian immigrants during the decades surrounding the 1917 Immigration Act and analyzes how these ideas fueled anti-Asian sentiment in 20th century America. 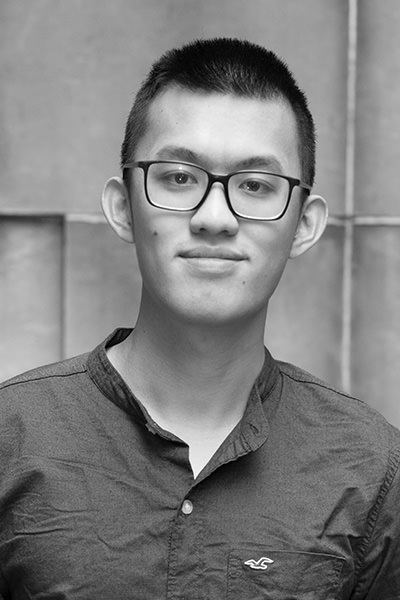 Andre is currently a sophomore attending Tandon School of Engineering. As someone who has participated in the NYC 1917 Immigration Act last semester, Andre is now researching how this act relates to the 1924 Immigration Act. In addition, he’s doing other school projects and is part of NYU’s D1 Ultimate Frisbee team. He loves to read, exercise, play video games and nap. 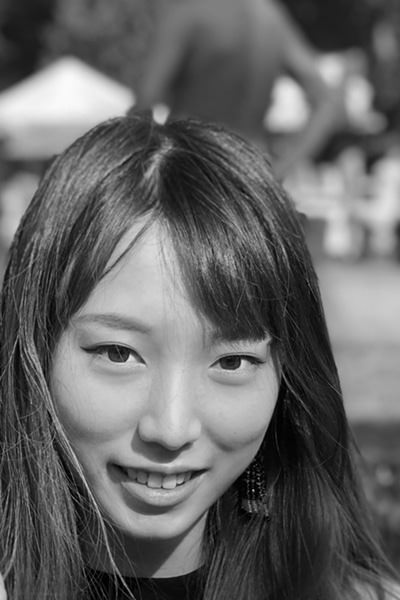 Sophie is currently a Sophomore at Tandon School of Engineering. She hopes to study patent or environmental law in the future. Sophie believes that the Humanities Research Lab: Immigrant Cities can practice her reading and analysing skills. Her research has focused on Woodrow Wilson: his identity as a segregationist yet vetoed the Immigration Act of 1917. Furthermore, she snowboards and practices Muay Thai Combat.